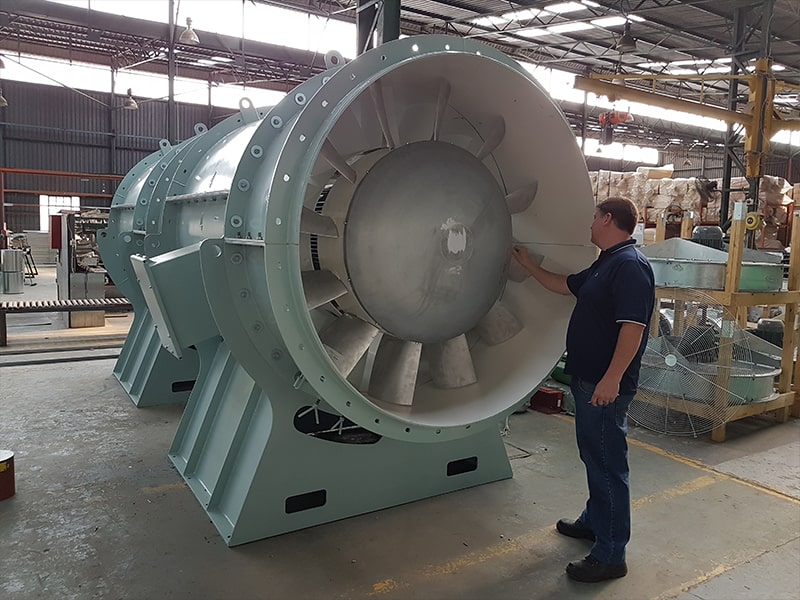 TLT ACTOM will be supplying a turnkey ventilation solution to Newmont Mining Corporation’s Subika Mine based at the Ahafo complex in Ghana. The solution will comprise both large surface fans and bulkhead cooler fans to the mine in order to ensure efficient ventilation of their main shaft.

TLT ACTOM will be supplying two Axial Main Surface Fans each spanning 2.5 metres in diameter and 3.5 metres in height, along with two Bulkhead Cooler Fans. The fan design will be based on parent-company, TLT Turbo’s technology while the manufacturing will be managed from TLT ACTOM’s headquarters in Johannesburg, South Africa. Delivery of the fans to Subika is set to commence from November 2017, with the full installation taking place in early 2018.

The project was brought to TLT ACTOM by their local Engineering, Procurement and Construction Management partners, DRA. “As part of the tendering process for the contract to supply the fans to Subika, we were required to present not just products and costing but rather, a solution. Providing total ventilation solutions for mining operations across Africa is what we as TLT ACTOM pride ourselves on and we leveraged our market knowledge to come up with a simple and cost effective solution for Subika. This is what made the difference when a ventilation supplier was selected for this project,” says Luther Erasmus, Managing Director at TLT ACTOM.

Newmont received its environmental permit to build and operate the Subika Underground mine in March 2017. In April of this year, Newmont announced plans to extend profitable production at its Ahafo operations by building a new underground mine and expanding plant capacity by more than 50 percent. According to a statement made by Newmont at the time, the Subika Underground mine is expected to produce 1.8 million ounces of gold over an 11-year mine life, and features ore grades of 4.7 grams per tonne. The expansion is expected to improve margins and support profitable production at Ahafo at least until 2029.

According to Erasmus, factors in the mine’s overall operations were taken into consideration and their team concluded that a complex design would not be suitable for fulfilling the ventilation needs of the mine. “Our main goal was to ensure that our ventilation solution provided higher efficiency while at the same using less energy. This led to a simpler design and installation plan for the fans which also carried the benefit of lower costs and more efficient operation for Subika,” Erasmus explains. The installed fans will run at an optimal efficiency of 87.5%.

Erasmus also states that further expansion into Africa forms part of TLT ACTOM’s current objectives and that their goal is to provide ventilation of the highest quality, with a lower energy usage benefit to mining operations as a means of establishing a footprint across the continent. “We are thrilled to be supplying to mining operations in Ghana as mining in the area is continually growing and with the right partners to supply innovative, turnkey equipment, I believe it will continue to do so. To this end, TLT ACTOM is currently exploring the feasibility of establishing a service office in Ghana to ensure continued support to clients in the region.”

TLT-Turbo Introduces the Next Generation of Mechanical Vapor Recompression

Quickly Get In Touch